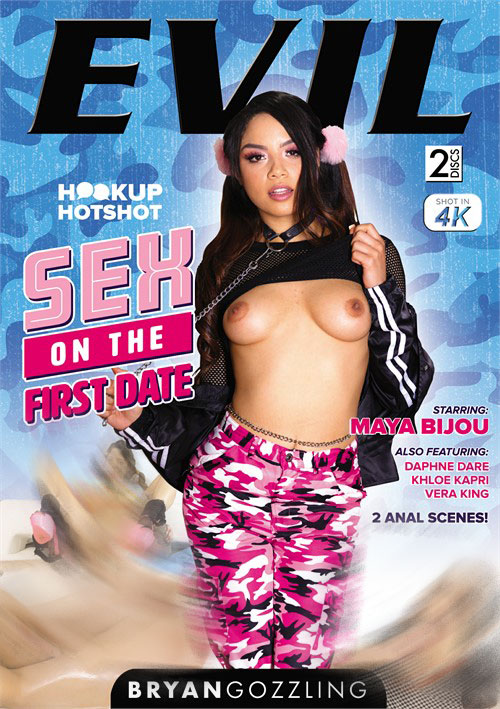 “Working with Bryan was super intense,” she recalls, “but also totally amazing. I gave him the nastiest scene I could. I didn’t hold a thing back. It was one crazy shoot!”

Cute Khloe Kapri has an equally wild encounter with the hands-on director, getting her sweet ass cheeks spanked bright red then getting fucked hard until she squirts all over his rigid rod!

“Nothing beats doing a really raunchy hardcore scene,” Khloe confides. “By the time I left I’d been fucked so good I could barely walk straight!”

“I love being dominated,” Daphne dishes. “Almost as much as I love taking a hot load on the face.”

Keep up with Maya Bijou, Daphne, and Khloe Kapri by following them on Twitter @MayaBijouXXX, @daphnedare, and @slutsaucekhloe. To book Maya, Daphne, Khloe, or any of the Hussie Models, visit https://hussiemodels.com/home/. 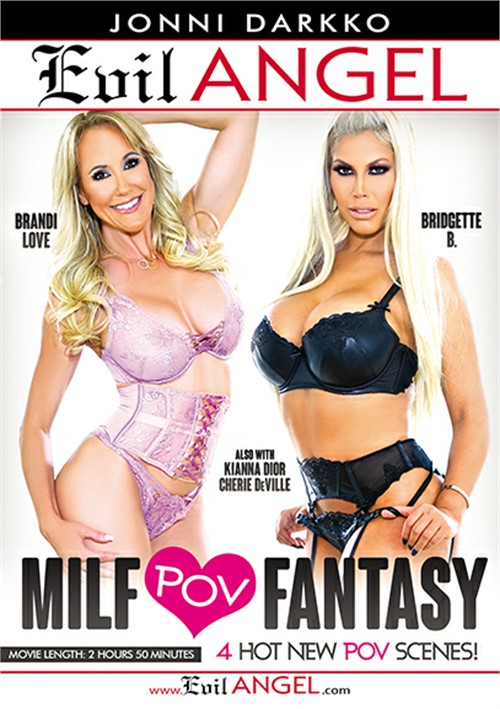 “This was my first time working with Jonni Darkko and after having the time of my life on his set, I hope it’s not the last,” says Brandi. “This was so much fun. I can’t wait for my fans to watch me in one of my hottest POV scenes to date!”

20 Releases in One Year, Including the New ‘Mick Loves Anikka’

VENICE, CA – BAM Visions is celebrating its first year of existence and what a spectacular year it has been.

Started just a year ago by Mick Blue, Anikka Albrite and Maestro Claudio, BAM has released 20 movies, scored several awards and had the best freshman year of any studio in memory.

Last week BAM released the 5-star reviewed Mick Loves Anikka, which stands as an ode to Porn’s Top Couple’s love for each other and marks the first time they have ever co-directed a movie. It is the most anticipated release from BAM so far.

They’ve made the media rounds recently to talk about the most exciting release of their lives and AVN has posted their version of events in an article titled “Mick and Anikka: Porn’s Royal Couple” by the great Jared Rutter, one of the industry’s most respected writers.

“The multiple awards they’ve won since becoming a couple – including several dual Performer of Year prizes – the widespread respect for them within the adult industry, and a large and worshipful fan base have earned them the affectionate title of ‘Porn’s Royal Couple,’” writes Rutter.

Meet Porn’s Royal Couple in person! They will be signing at Exxxotica Chicago this Saturday and Sunday.

The entire article can be found at http://business.avn.com/articles/video/Mick-and-Anikka-Porn-s-Royal-Couple-684868.html.

Get more information and watch the trailer for Mick Loves Anikka http://www.evilangelvideo.com/video/5409/Mick-Loves-Anikka/. The SFW trailer can be viewed at https://youtu.be/bobMH4X9Ee0.

Exxxotica Chicago is July 8-10. For complete details go to http://chi.exxxoticaexpo.com.

VENICE, CA – The creative juices at BAM Visions keep on flowing. The company’s next release – available to order now and on sale June 8 – is the follow-up to the wildly popular Spunked that the company released in January.

The award-winning company, created a year ago by Mick Blue, Anikka Albrite and Maestro Claudio, now has 16 movies in its impressive catalog and not a sleeper in the bunch. These are three pros all at the top of their game and their output stands up to any studio in the adult industry today.

“We are extremely proud of Spunked #2,” Mick said. “I don’t want to say it was better than the first one, because we all really loved that movie, but I think it might be. These women really brought everything with them and I feel like we definitely shot some of the best scenes any of them have done so far in their careers. I think we are really doing them justice with the production end, too. We are capturing the sex in a very high technical level, but also we’re really able to do it in the BAM style, which fans are really reacting to.”

VENICE, CA – Part of Mick Blue’s tremendous success in the adult industry is his passion for virtually any kind of sex and he does not discriminate based on age.

The MPOY Gets His First Anals With the All-Foxy Lineup

Mick was named to the CNBC Dirty Dozen this year. Check it out at www.cnbc.com/2016/01/16/the-dirty-dozen-porns-biggest-stars.html?slide=13. 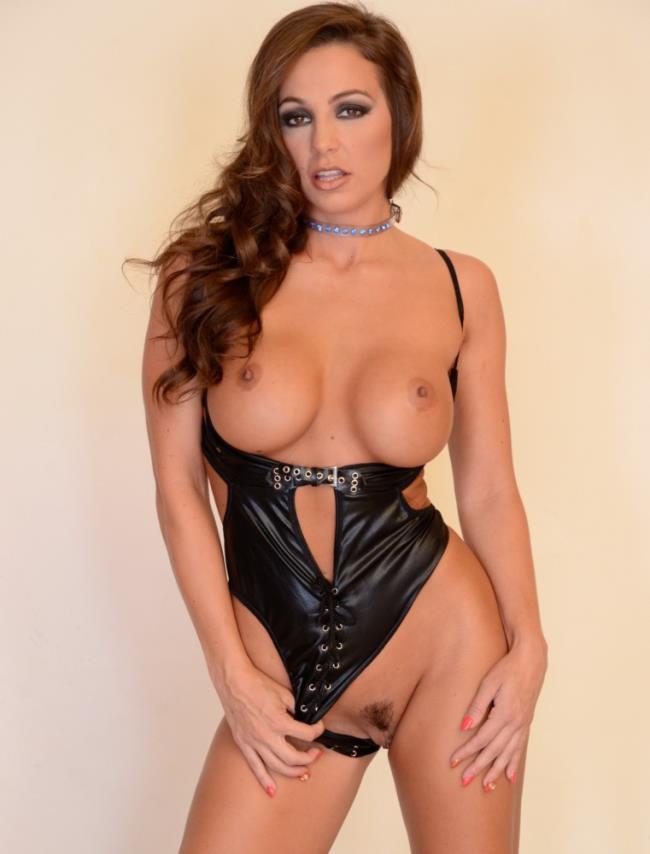 Another First as the Starlet Continues to Try New Things

In Tease My Ass & Fuck My Pussy, which releases next week, she worked with Mick Blue while Maestro Claudio was behind the camera.

“I have never had a man play with my ass before and it was definitely a wonderful new sensation,” Abigail said. “BAM Visions has really opened me up to new experiences recently!”

This comes weeks after her appearance in Anikka’s Bootycise, Anikka Albrite’s BAM Visions directorial debut, of which she said, “I have never had someone stretch my asshole like that before! We had so much fun laughing and trying new things in our buttholes!”

The third episode of Digital Playground’s True Detective series starring Abigail is now on the company’s website. This time she takes on Chad White as directed by Jakodema.

Aaliyah Love: All You Need Is Love (Adult DVD Empire) releases this week and features a hot Aaliyah-Abigail scene.

“Working with Aaliyah was wonderful,” Abigail said. “She is bubbly, gorgeous, and sensual. I was so honored to be asked to be a part of her showcase. She is one of the best performers I have ever worked with!”

Watch the trailer for Tease My Ass & Fuck My Pussy at www.evilangelvideo.com/video/5189/Tease-My-Ass-&-Fuck-My-Pussy/.

Try on Abigail’s new custom shirt, which is now available through her new site, www.MacCityThreads.com.

Check out Abigail’s YouTube page at http://youtu.be/j7BWZ_FbydY. Connect with Abigail through Chatstar, a service that allows fans to send texts to their favorite women. For more information go to http://chatstar.com. Abigail’s official website is www.AbigailMac.com and contains exclusive HD content including videos, photos and daily updates. For feature bookings contact A-List Features at http://www.alistfeatures.com. Also check out her Clips4sale store at http://clips4sale.com/94905, VENICE, CA – This week fans get a glimpse into a great new piece of Anikka Albrite’s career with the release of the first movie she has ever directed, Anikka’s Bootycise (BAM Visions/Evil Angel).

Since forming BAM Visions with husband Mick Blue and Maestro Claudio the company had released three movies, but this is the first with Anikka helming the project. Along with Anikka, the movie stars Abigail Mac, Bree Daniels, Jenna Sativa and Mia Malkova.

“I am really excited for the fans to see my first directorial debut!” Anikka said. “It’s something I worked hard on and it has an amazing cast. I have a very perverted mind and directing gives me the chance to film my devious fantasies and share my passions with the fans.”

The all-girl movie features Anikka and her friends in a non-traditional workout intended to, as Anikka describes it, “help them exercise their beautiful buttholes.”

“All four of these ladies have a special place in my heart, and every scene is a little different from the others in order to showcase their assets and personalities. This is a movie that has something for everyone, and both lesbian and straight fans will love it! I learned a lot about directing, especially that not everything is going to go exactly as planned, but you just have to go with it and make the best out of changing situations and it will be amazing.”

Over the weekend the Female Performer of the Year Triple Crown winner was awarded Best Female Performer – Fan Choice at the 2015 NightMoves Awards, continuing her impressive winning streak.

This week she and Mick will be at Venus Berlin and signing at the Starwalk. Attendees can find them here:

For more information go to www.venus-berlin.com/en/.

For more information on BAM Visions go to http://www.evilangelvideo.com/director/49/Mick-Blue-&-Maestro-Claudio/. “I’m hoping My Evil Stepmom Fucked My Ass gets a good response,” Dana said. “It was fun to shoot. I had wanted to explore the taboo aspect of incest and older/younger themes, but wasn’t sure what kind of movie to shoot exactly. Suddenly the movie title popped in my head, which made me laugh. I was happy and giddy and decided to just go with it.”

She just finished shooting Prison Lesbians 2 for Sweetheart says she is “very happy” with the shoot.

“Everyone was outstanding,” she said. “I think people are going to be very happy when they see it.” VENICE, CA – After spending Thanksgiving week in Europe, Bonnie Rotten is back in the USA and rocking like she never left.

She hosted the Extasia Expo in Zurich, Switzerland, which at its peak brought in almost 11,000 people. She also did some very successful signings in Amsterdam while she was in the neighborhood.

Back home she has a much-anticipated movie coming out, Rocco’s Intimate Initiations (Rocco Siffredi/Evil Angel), on which she shares the cover with Skin Diamond, and they share Rocco in an amazing scene. Fans can also see her in The Best of Devil’s Film (Devil’s Film) this week.

She got an XCritic Pick for Bonnie Rotten Is Squirtwoman from John Boy, who calls it a “visual sensation.”

“Bonnie Rotten is Squirtwoman features gushing orgasms and hardcore fetish fucking that’s shot in a way that keeps you up close and personal in the middle of all the pussy pumping action,” he writes. “This is a collection of four well thought out scenes that are a visual sensation with the high quality production and hint at rough sex and fetish fantasies with leather, metal and the mask and robes from a secret society.”

Check out some of the press she got in Europe in the past week at www.20min.ch/schweiz/basel/story/10-500-Besucher-kamen-zur-Extasia-nach-Basel-30611320 and www.youtube.com/embed/spfjSapmiHs.