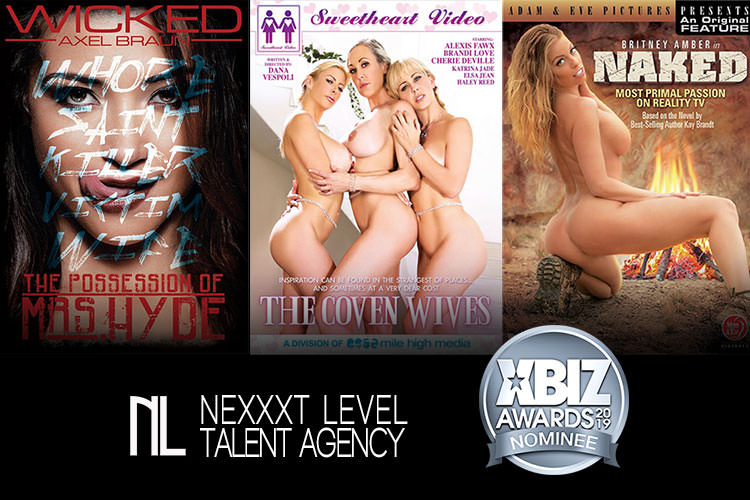 Hollywood, CA – XBIZ has announced the finalist nominees for the most comprehensive showcase of outstanding achievements across the adult industry, the 2019 XBIZ Awards, presented by MyFreeCams and Nexxxt Level Talent agency is proud to once again have earned top nods for their extraordinary clients.

One of the most talked about movies of the year, The Possession of Mrs. Hyde, from Axel Braun, drew a slew of high-profile nominations, including Feature of the Year, Best Screenplay, Best Actor, and Best Actress, a role played by Nexxxt Level superstar Avi Love. Award-winning director Axel Braun cast her in the lead role of his first feature in over fifteen years, The Possession of Mrs. Hyde.

The charismatic auteur explains he dreamed of shooting the new release for over a decade and a half but couldn’t find the right actress to fill the lead role – despite auditioning hundreds of girls! Then in walked Nexxxt Level superstar Avi Love!

“Avi’s performance in The Possession of Mrs. Hyde was literally mind-blowing on all levels, and I’ve been doing this for almost 30 years,” crows Braun. “Her acting is the best I have ever seen, and her sexual energy is unmatched. Her chemistry with Seth was so raw and real that it really brought everything I’ve always wanted to this project.”

“Axel Braun is a brilliant director,” Avi adds. “I am forever thankful to be a part of this epic feature!”

She also has a shot at Girl/Girl Performer of the Year, in no small part for her work with Cherie DeVille and Alexis Fawx in The Coven Wives (Sweetheart/Mile High). Brandi is a Sweetheart Contract Girl, and as such has shot several sizzling scenes for the company, including Brandi Loves MILFs (Sweetheart Video), nominated for All-Girl Release of the Year — Non-Feature.

“Everything about this project was special,” Britney shares. “I am so grateful to have been part of this incredible project, and thrilled it is receiving the recognition it deserves. Thanks to Kay and thanks to XBIZ!”

Nexxxt Level is thrilled with having their stars honored for their roles in the top movies of the year, expressing both gratitude and kudos.

“We’re honored to have our superstars recognized,” offers Nexxxt Level’s Jonathan Morgan. “Thanks to XBIZ and congratulations to all the other nominees!”

Nexxxt Level nominations are as follows:

Girl Girl Performer of the Year