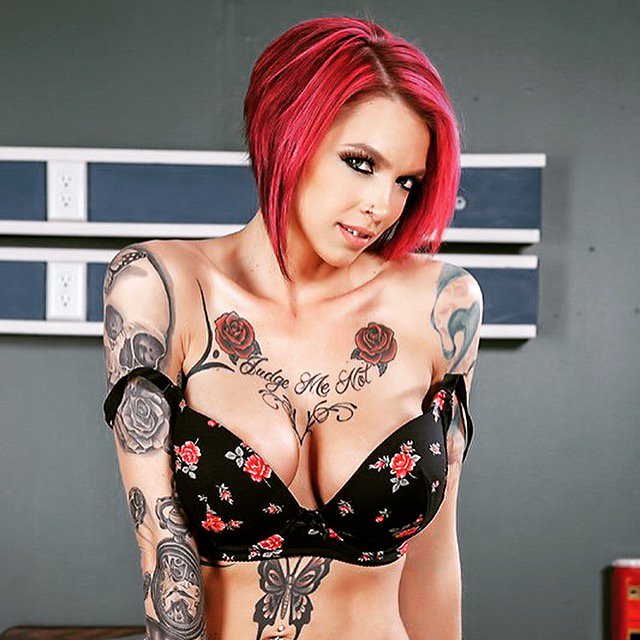 VENICE, CA – Anna Bell Peaks is not a tiny girl but she looks smaller than she is when you get her into the same frame as Shane Diesel and his enormous cock.

This week Digital Sin releases Shane Diesel’s Black Bull for Hire 4 and it shows Anna, one of the industry’s hottest stars today, taking on the legend himself.

“Working with someone like Shane is a big deal and I mean that in every way!” Anna said. “He is one of the industry’s biggest stars with one of the biggest cocks and believe me, the man knows how to use it! We had a fantastic scene and I’m super excited to see it on DVD!”

Speaking of Anna’s threeway with Katy Kiss (Poison Ivy) and Owen Grey (The Riddler), he said it was very good and he “really liked how Anna Bell Peaks took charge with her dirty talk, it was really sexy. Both Anna Bell, and Katy Kiss look really great in-character, as Owen gives them the dick.”

Other reviewers have been over the moon with Anna’s performance. For his Master Sergio website, Giovanni Deidio wrote that Anna “better get an AVN nomination for this role!” Rog Reviews namesake Roger Pipe said that the “good looking action that is made better thanks to Anna’s constantly hot mouth.”

She is defending her Perfect Pussy crown at this year’s Inked Awards while also vying for Social Media Queen, Best Website, Inked Starlet of the Year and Inked Group Scene of the Year for I Banged My Tattooed Step Sister in the Ass (Burning Angel) with Joanna Angel and Toni Ribas. Get more information at http://inkedawards.net.

Anna has a new YouTube channel at (https://www.youtube.com/channel/UCuRqetmEVU6AUFHeWa85p7A). Check out her ManyVids selection at https://www.manyvids.com/Profile/152830/Anna-Bell-Peaks/. To contact Anna for custom boy/girl or girl/girl videos or to order one-on-one Skype time with her, email annabellpeaksxx@gmail.com.

Catch her webcam shows at MyFreeCams and ImLive by looking for Anna Bell Peaks. Connect with her with Chaturbate at http://chaturbate.com/affiliates/in/7Bge/n5KgV/?room=annabellpeaksxx.

Book her for shoots through OC Modeling at http://ocmodeling.com/model/anna-bell-peaks/. Feature engagements can be booked through Derek at Lee Network and Dave Michaels at A-List Features. Go to http://www.theleenetwork.com/stars.php?id=127 and http://www.alistfeatures.com.

Follow her on Twitter (@annabellpeaksxx) and connect with her through Dream Lover at http://www.dreamlover.com/AnnaBellPeaks. Her official website is http://www.AnnaBellPeaks.xxx. For everything Anna Bell Peaks go to http://www.risingstarpr.com.