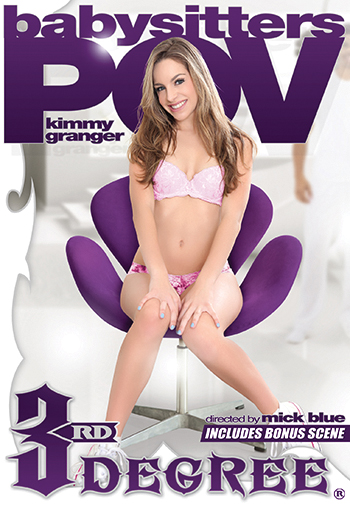 Also: Male Performer of the Year on 2 Box Covers This Week

VENICE, CA – This is quickly turning into Mick Blue’s most productive year to date and this week there is another title directed by the superstar, who also appears in each of the movie’s four scenes.

Third Degree released Babysitter POV this week and this time Mick enlisted a quartet of young babysitter types to take care of him. Hot young starlet Kimmy Granger got the cover and is supported by busty Subil Arch, full-muffed Tali Dova and tattooed April Brookes.

“I love shooting POV movies/scenes because it is a very personal and real experience that I can share with my fans,” he said. “I love giving the viewers the closest experience possible to the real-time action. All the better, in this movie all the girls I had the pleasure working with where great. They were very naughty babysitters indeed!”

It’s unusual for guys in the adult industry to get on the box covers, but Mick has two this week: A Wife Betrayed (Pretty Dirty) with Bianca Breeze and Rachel James and DP Me 4 (Hard X) cover with Morgan Lee.

“All 4 girls where fantastic,” Mick says of DP Me 4. “[Director] Mason has the gift to bring out the best of every girl she shoots and it definitely shows in this movie. It was super fun for us guys to work with them.”

Mick can also be seen in He’s in Charge 2 (Digital Sin), Wetter Better Asses (New Sensations) and My DP (Tushy.com).

For more information on Babysitter POV go to http://3rddegreepress.com/babysitters-pov/.

This entry was posted in Uncategorized and tagged Anikka Albrite, Mick Blue. Bookmark the permalink.