Alexia will be joined by Rachele Richey, a buxom former pageant-queen-turned-porn-star from Dallas.

“I really loved my debut Cherry Pimps show and can’t wait to do Monday’s show,” Alexia said. “Rachele is delicious and we’re going to have an amazing time together.”

Last week XCritic published their interview with Alexia and she did her first Cherry Pimps show – a huge hit with fans – late last month.

The live Cherry Pimps show will be at 5 pm PST. For updates follow @cherrypimps and visit http://www.cherrypimps.com for more information.

VENICE, CA – The rise of Alexia Vosse continues with her official XCritic Interview going live this week, a must-do media stop for every starlet on the verge of breaking out.

“It’s nice to see Alexia Vosse back in action,” Warrior writes in his introduction. “She is better than ever and I expect her to be edgier, too. This petite blonde beauty will definitely be a crowd pleaser when her probable feature dancing career starts off. Alexia’s hard work will make it happen. Then, her 32 DD tits will make lots of guys toss their money onto the stage for some close-up personal attention and those follow-up lap dances will be hot.”

Alexia and Warrior cover how she got into the industry (a friend), her hot body (intense training!), what she likes most in a woman (confidence) and a man (you’ll have to read the interview for that secret) and much more.

“I signed up for pole dancing classes so hopefully within the next couple of months,” she teased when asked if she would begin feature dancing. “Fingers crossed. Soon I’m gonna post some videos on Instagram and Twitter to hopefully spark some interest.”

Check out Alexia’s first-ever boy/girl on DVD in Big Round Asses (Airerose). She will be doing a live Cherry Pimps show on June 22. You Wanted the Best, You Got the Best!

VENICE, CA – Fans are still recovering from Alexia Vosse’s debut live show just a couple weeks ago and now they have the opportunity to get it up for her again. This Wednesday, June 10, she will be doing a dynamite live show for Immoral Live.

It seems that Alexia is about the hot new thing in the live shows arena as she also has a live Cherry Pimps show coming up June 22.

“I was surprised at how much I enjoyed the experience of doing a live show,” Alexia said. “It adds a real raw and intense element and I think it’s a different kind of connection with fans, too. I’m really looking forward to doing the Immoral show on Wednesday!”

In other Alexia news, one of her new movies got an enthusiastic review from Captain Jack at Adult DVD Talk.

Writing about Big Round Asses (Airerose), the good Captain pointed out that it was his first experience with the former Payton West (Alexia) since the name change and that she “has a well-built body and it’s shown off nicely.”

After giving a great rundown of the sizzling scene, he declares, “Methinks that Erik liked banging Alexia! These two had some nice chemistry together and Erik strokes off all over her big butt.”

That movie was the first DVD to feature a boy/girl scene of Alexia and there will be more coming soon. Also check out her scene with Will Powers on http://m.1000facials.com/en/show/Sperm-Is-Tasty-Scene-01/76113. 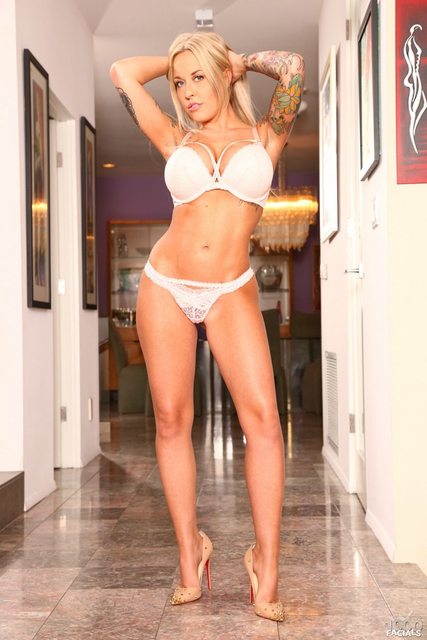 VENICE, CA – Alexia Vosse’s recent decision to work with men has led to some amazing scenes and some very enjoyable experiences for the young starlet, and one of her favorites to date has been the just-released scene for 1000facials.com.

She got matched up with Will Powers for a scene that absolutely lives up to the site’s name.

“I liked Will’s relaxed attitude,” Alexia said. “He really was a pleasure to work with and I hope to be partnered up with him too. “

Alexia (formerly known as Payton West) recently had the first-ever DVD featuring one of her boy/girl scenes make it to DVD on Airerose’s Big Round Asses. Also look for her in Big Wet Tits 14 (Elegant Angel) and in “This Young Slut” on Brazzers.com.

Alexia’s official website is www.AlexiaVosse.com (It launches July 1). Follow her on Twitter @AlexiaVosse. She can be booked through 101 Modeling at www.101modeling.com/site/talent/talent.php?t_id=843&pageType=profile. For everything Alexia go to http://risingstarpr.com/clients/alexia-vosse/. Alexia, whose first boy/girl scene to make it to DVD was just released on Airerose’s Big Round Asses, is excited about the show.

“Jessica is really hot and I love the idea of performing live,” she said. “There’s something raw and real about it and I know it’s going to be an amazing show that fans are going to love.”

Also look for her in Big Wet Tits 14 (Elegant Angel), “This Young Slut” on Brazzers.com and in a scene with Will Powers on www.1000facials.com.

Alexia’s official website is www.AlexiaVosse.com (It launches July 1). Follow her on Twitter @AlexiaVosse. She can be booked through 101 Modeling at www.101modeling.com/site/talent/talent.php?t_id=843&pageType=profile. For everything Alexia go to http://risingstarpr.com/clients/alexia-vosse/. ‘Big Round Asses’ Is the First Disc to Have Her Working With a Guy!

VENICE, CA – One more thing can be checked off Alexia Vosse’s to-do list: with Airerose Entertainment releasing Big Round Asses on DVD fans can buy a disc featuring her having sex with a guy for the first time.

While it wasn’t actually the first boy/girl she ever shot, it’s obviously one of the first of what she hopes will be many. She had the deep pleasure of working with Erik Everhard in the movie, which she is very excited to see.

“I can be kind of sentimental sometimes and I’m really excited that this scene will be on DVD,” Alexia said. “It’s going to be awesome to be able to pop a DVD in the player and be able to relive that day anytime I want!”

In the scene she is decked out in black, lacy lingerie – and she keeps much of it on right through the fucking, which is super hot.

For more information go to http://forum.adultdvdtalk.com/big-round-asses-528-abella-dangers-first-bbg.

Also look for her in Big Wet Tits 14 (Elegant Angel), “This Young Slut” on Brazzers.com and in a scene with Will Powers on www.1000facials.com. VENICE, CA – All eyes are on Alexia Vosse as she makes her transition from a girl/girl-only performer (named Lauryn) into the richer territory of boy/girl shoots. Appropriately, she just did a shoot for Hustler titled Crazy Rich Bitches that will feature one of her first scenes with a guy.

She works with Tommy Pistol in the movie, with Tommy playing an employee at a store where Alexia likes to shop. She’s a big spender at the store and she knows they want to maintain her as a customer so she starts making demands – and Tommy really does want to keep her happy.

“I know I’m one of their best customers,” Alexia says of the scene. “I use that to my advantage and tell Tommy he needs to fuck me or I’m not going to shop there any more. He was a real loyal company man and treated me really well. The customer is always right!”

She also just worked with Will Powers in a shoot for Zero Tolerance that will be found on www.1000facials.com. She also shot for http://kin8tengoku.com/ this week.

Her official website launches July 1. On May 28 Airerose Entertainment will release the first-ever Alexia boy/girl scene available on DVD. VENICE, CA – Fans barely got to know Alexia Vosse when she first joined the adult industry. Debuting (as Payton West) for TNVGirls and doing exclusively girl/girl from 2005 to 2008, Alexia left for a few years pursuing adventures around the world.

Born in Los Angeles and raised in La Jolla, she has returned both to Southern California and to the adult industry and she is ready to go places she didn’t dare during her first stint in the industry.

“I’ve changed in a lot of ways since I was in the industry seven years ago,” Alexia said. “I’m definitely ready to take on things that I wasn’t necessarily ready for back then. I’ve really grown as a person and that is allowing me to grow as a performer as well. The reaction so far has been amazing and I’m really excited to see how things progress!”

On May 28 Airerose Entertainment will release the first-ever Alexia boy/girl scene to DVD.

Alexia recently signed on with 101 Modeling and has enlisted Rising Star PR for all of her publicity needs. For interviews and other media opportunities email info@risingstarpr.com.