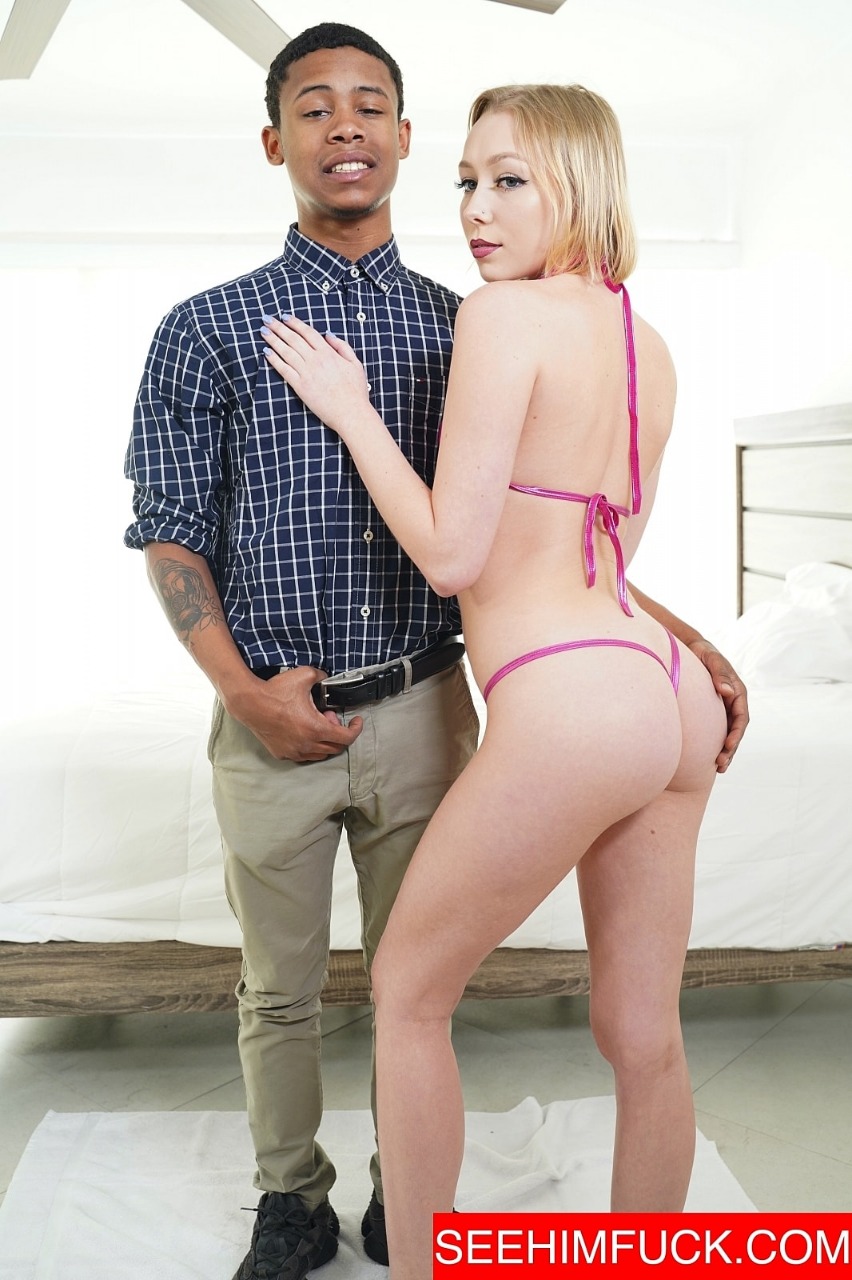 Sweet Blonde Athena May Takes Good Care of Her Man

HOLLYWOOD – At 20 years old, it’s a good idea for Lil D to like older ladies, otherwise he would be shutting out the vast majority of legal females.

SeeHimFuck.com set him up with an older beauty for a great new scene. Sure, Athena May is only four months older than Mr. D, but technically it counts. And one thing about older women, they will do EVERYTHING! This scene is probably the most attention he’s had from one of his fabulous lady loves in the industry and Athena does everything she can to make it a memorable moment for the young stud.

Before Athena and her magic tongue can get to work, Lil D slowly gets undressed, taking particular time with his bright yellow boxers as he strokes his cock hard for the camera. Once he’s naked and hard, it’s impossible to keep Athena away for long. He swings his bat a few times and then the 20-year-old blonde comes out to get a look. She douses his body with oil, lines of it dripping from his shoulders down his chest to his cock and below. Standing behind him, Bella rubs it in, paying attention to his cock, which is soon shiny and black.

She smiles as she licks his feet and sucks at his toes, showing off her braces. With a tongue like hers there’s no fear of metal catching on anything, and besides, she’s a seasoned pro. Lil D clearly likes the act, shoving his less-attended-to foot in her face as a reminder that it needs her love, too. It’s an enthusiastic foot worship bit and Lil D can be seen rolling his eyes in pleasure as he jerks off. Athena soon works her way up, giving her man a good ass rimming as he watches and helps out a bit by pulling her head closer. The camera really captures her pink tongue working wildly beneath his black ball sack and it’s hard to tell who is enjoying the act more, him or her.

With his asshole fully pleasured, she moves on to his cock and the heavy-hanging balls. She does her best to get it all in her mouth and Lil D does what he can to help, but it’s no use. It’s simply too big for the little thing’s throat. He talks dirty to her as she blows him, looking up at him all the while, gagging and laughing as she tries so hard to master his monster.

Lil D finally lets her fuck him and Athena gets on top. He smacks her big, white ass until it’s pink and then red. She rides him, happy no doubt that she can get all his dick into her pussy. Her moans tell a story of pure pleasure, though it could be said of SeeHimFuck scenes that the pleasure’s all his.

Nonetheless, the lady clearly enjoys herself. Things really take off when they get into doggie style and Lil D positions himself with one foot on her head and one hand smacking her ass as he works up steam. Once he has a rhythm going, he pulls her head up by her hair and thrusts hard into the white girl’s hole. Occasionally he looks at the camera and gives a knowing you-see-how-good-I-got-it look while Athena submits to his thrashing.

Lil D is represented by Hussie Models. For more information and to book him go to https://hussiemodels.com/portfolio-item/lil-d/.

This entry was posted in Uncategorized and tagged Lil D, See Him Fuck. Bookmark the permalink.