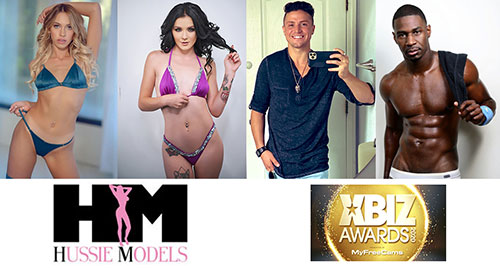 Sexy newbie Rosalyn Sphinx scored a nomination for Best New Starlet and also starred in and had the cover of Mad Sensation (PornFidelity/Kelly Madison Media), which is nominated for All-Sex Release of the Year. She entered the business last year at age 18 and has more than 60 scenes to her credit. She was nominated for Best New Starlet at the 2019 AVN Awards and 2019 NightMoves Awards.

Jay Romero, who entered the business earlier this year, did enough fine work over a few dozen scenes to earn himself a Best Male Newcomer nomination. Most of his work has been for Naughty America, but he has also worked for Hussie Pass, Bang.com, Devil’s Film, Reality Kings and many other fine companies.

Khloe Kapri, who has been one of the busiest starlets of the past two years, got a nomination for Best Sex Scene – All-Sex for Second Parents (Pure Taboo) with Ryan Keely and Tommy Pistol. Khloe has shot more than 200 scenes in two years and scored four awards nominations prior to this honor from XBIZ.

The 2020 XBIZ Awards will be held Thurs., Jan. 16 at the JW Marriott L.A. Live in downtown Los Angeles. For more information go to https://xbizawards.xbiz.com.

To book any of these fine performers and many more contact Hussie Models, the only talent agency licensed in bonded in both California and Florida, at https://hussiemodels.com.