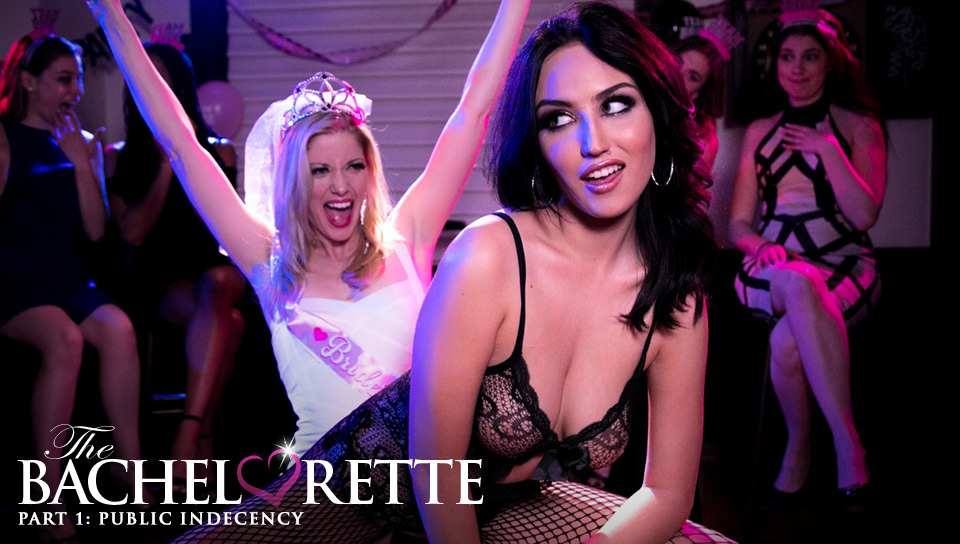 VENICE, CA – Charlotte Stokely stars in a new three-parter for Girlsway titled “The Bachelorette” and it’s an early frontrunner for a best of 2019 list of Charlotte scenes.

The hottest girl/girl performer of (at least) the past year, Charlotte gets sexy in scenes one and three, lapping up the fun with Jade Baker and then Kira Noir. Charlotte is a bride-to-be and at her bachelorette party there is a sexy exotic dancer, Jade. Things get pretty hot pretty fast and with the encouragement of partygoers, Charlotte has a dirty and all-too-public session with the stripper and, not surprisingly, someone has taped it.

That someone is Kira, aka the maid of honor. So we rewind:

Charlotte is pawing hungrily at Jade’s body, panting with lust. Eventually, to the shock of the onlooking partygoers, the bachelorette’s urges become so great that, still entranced by Jade’s performance, she slides her hands down between the stripper’s legs and begins to massage her pussy. Jade lets out a very satisfied gasp and moan, as the other partygoers gasp – their whispers and giggles becoming more pronounced as they watch on in disturbed and intrigued curiosity. Charlotte begins to give the dancer a reach-around finger bang as Jade continues to grind, buck and sway on her lap, until eventually Jade cums, biting her lip in pure ecstasy. Saying that she wants to return the favor, Jade slips Charlotte out of her clothes….

What a maid of honor, always looking out for the bride-to-be. So what is she going to do with that video? Edit it into an unforgettable wedding gift for the couple? It turns out she didn’t hire a female dancer by accident: she set up the dancer and the seduction. But she’s in a little hot water of her own as Jade wants to be paid for the night’s extras – and she doesn’t want cash, she wants gash. Jade, reluctant to have a sizzling session in her office, eventually gives in and gets off.

In part 3, Charlotte is tired of being avoided by her maid of honor and goes to Kira’s house. She wants that video deleted so that she can move on with her life. Kira refuses. While Charlotte portrays the wild party hookup as “last night of being single,” Kira suspects it is something more. Charlotte doesn’t seem to have passion for her fiancé, but when she hooked up with that stripper, Charlotte came to life. Does Charlotte even like men? Or is she secretly a lesbian? Finally, Charlotte cracks. “I like…GIRLS!” she says as the reality sinks in. The two are soon naked and enjoying each other’s bodies for the first time. For Charlotte, this was a revelation. For Kira…the sexy results of a diabolical plan? Charlotte may never know.