What a Day! Shoots with Charles Dera for Director James Avalon

VENICE, CA – Adria Rae may seem a little too young and way too hot to become your stepmother, but any adult movie worth the polycarbonate plastic it’s burned onto can find a place for Adria.

In The Stepmother 15, AVN Hall of Fame director James Avalon casts her as another family member in a family that has much more happening than meets the eye. Adria works with Charles Dera.

“He is a very good looking man and we had a terrific scene in The Stepmother where I play a young newlywed whose new stepmother and brother messed around behind everyone’s back. Working with James Avalon is obviously an incredible experience as well. It’s very comforting to be in a situation where everyone is a professional.”

Adria is on Snapchat, of course, but now she’s offering the opportunity to access her premium Snapchat. For just $20 (payable with Amazon gift cards) you can get lifetime access to chat with her, nudes, BTS and much more fun! Just enter her email (adriaraexxx@gmail.com) in the gift card amount, add your Snapchat username in the message box and you are there! She will add you as a friend to her private Snap and she will add you as a friend, granting you immediate and eternal access.

Book Adria through LA Direct Models at http://www.ladirectmodels.com/model.php?n=AdriaRae. Her Twitter & Snapchat are @adriaraexx, Instagram is adriaraexx. For everything Adria Rae got to http://risingstarpr.com/clients/adria-rae/.

Also: Talking About Love as a Performer in AVN

VENICE, CA – Adam & Eve is expanding on last year’s blockbuster Babysitting the Baumgartners into a legit franchise with a much-anticipated follow-up, Adventures with the Baumgartners, and they’re bringing back the leading couple, Mick Blue and Anikka Albrite.

UK’s Hush-Hush previews the new movie with a collection of photos, some sexy tidbits and a word from the director, Kay Brandt.

“Fans are excited about Adventures with the Baumgartners, and have been clamoring to see it, but since it’s still not ready for release, the next best thing is presenting this gallery to give everyone a peek into the movie,” Brandt told Hush-Hush about the movie, which is scheduled for release in May.

“The first movie was one of the most intense shoots I’ve ever been a part of and something really special came from it,” Mick said. “It was great to work with Anikka as my on-screen wife and the fan reaction was huge, so we were all ready to go when they decided to do a follow-up.”

Mick and Anikka are also featured in Valentine’s Day-themed piece in the February AVN and it went live on AVN.com this week in the name of timeliness.

“The part of being in a relationship with another adult performer is that we can share our life and our job together and we also have the possibility to take and spend free time together as we would like to plan when ever and how long we want,” Mick told AVN. “We understand each other’s jobs and are here for each other to support our careers.”

She May Be Working With Guys, But She Hasn’t Lost Her Love of Pussy

VENICE, CA – If you’re Zero Tolerance and you’re putting together a collection titled Total Lesbian you know you’re going to include Abigail Mac in the movie. And if you’re going to put her in the movie, why not just go all the way and put her on the cover?

The box for Total Lesbian features Abigail in full lick mode, her tongue deep inside a sweet ass while her fingers spread a perfect pussy right before her pretty eyes.

She is, of course, something of a legend in the girl-girl corner of the business and was one of the hottest “ladies only” shooters in the industry before going all the way and adding guys to her resume. That experience – and let’s be honest, Abigail really does love women both on-screen and in real life – means that few in the world can do what Abi can do with her tongue.

“I love that cover!” Abigail said. “It brings back some great memories. You see that look on my face and you know I’m in heaven!”

Abigail has also appeared in My Roommate’s A Lesbian 6 and Lesbian Perspective 2 from Zero Tolerance).

Look for her recent Fleshbot feature on Abigail at http://straight.fleshbot.com/6019509/five-reasons-why-i-loved-being-in-because-i-am-woman-by-abigail-mac.

For everything Abigail go to http://risingstarpr.com/clients/abigail-mac/. 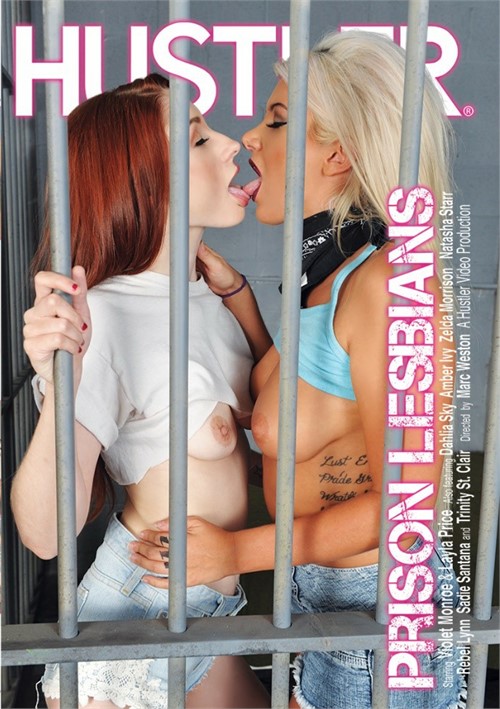 Beautiful and blonde. Sexy and familiar somehow…could it be?…You have just been locked in a cell with Layla Price! That’ll put the “ahh” in “lockup”!

“If I’m going to be locked up, I could do a lot worse than Violet Monroe!” Layla said. “It’s hardly punishment to have her to myself day and night. Of course the food isn’t very good in there, but we managed!”

Layla and Violet share the cover for Hustler’s Prison Lesbians, which is being released this week, presumably as part of the company’s Valentine’s Day celebration.

Layla is also the featured guest on the @288Podcast. They talk lube, sex and…well, there was a lot of drinking involved. Check it out on iTunes or Stitcher.

Book a private Skype show with Layla today by contacting her directly at shootlaylaprice@gmail.com.

Marijuana: For information on Gorilla Glue and Layla’s other marijuana strains go to http://www.shopmarijuana.com.

For everything Layla Price go to http://risingstarpr.com/clients/laela-pryce-bio/.

VENICE, CA – Fresh off her most recent birthday, gorgeous “girl next door” Jennifer White is celebrating the most amorous weekend of the year celebrating with a post-Valentine’s Day peel off that is sure to stun fans, new and old alike!

“I know it’s a tough time of year for some folks,” the always delightful starlet opines. “That’s why I wanted to get out and spread the love! There’s plenty of me to go around so no one has to feel lonely or left out, I promise!”

The timeless beauty will be hitting the stage this weekend at Expose in San Diego for four shows! Starting on Friday, February 17 and running through Saturday night, the coveted “girl next door” will hit the stage for mind-blowing shows at 10 pm and 12 midnight both nights!

On the off chance you missed Jennifer’s birthday last week, you can still offer belated well-wishing via her Amazon wishlist at https://www.amazon.com/wishlist/1T6D2AM6SC2KF/ref=cm_sw_em_r_n_ws_fdcJnb0SJ1DXA_wb.

“Explicit List:  So, our readers here at explicitlist.com are dying to know what is the kinkiest thing that you have ever done?

Audrey Noir: Showed up at the SLC Utah airport pick up in nothing by a skimpy hooker dress, heels, and a butt plug in my ass (which I put in after I arrived) to meet with a professional and lifestyle Master, also Lawyer. Then proceeded to greet him by kneeling down and kissing his boots. Then he made me give him head while fingering me on the way to his house. Oh, and I was his sex slave for 5 hours straight without stopping while he said unspeakable things, slapped and spat in my face. I squirted. I’m not a squirter either.”

You can read the rest of Audrey’s blistering hot interview with Explicit List for yourself by visiting http://explicitlist.com/2017/02/audrey-noir-explicit-insider-interview/.

‘My Husband Hate’s Butthole’ is now available from Team Skeet and TeensLoveAnal.com. To check out the free trailer and you’re your copy visit http://www.teamskeet.com/t1/trailer/view/my_husband_doesnt_like_buttholes/audrey_noir?type=low_res&trailer=b.

For everything Audrey Noir: http://risingstarpr.com/clients/audrey-noir/.

VENICE, CA – It’s well known that girls don’t like guys who drive dirty cars and some girls – like Anikka Albrite – are willing to help in extraordinary ways.

In Elegant Angel’s Car Wash Girls 4, Anikka, along with clean-car-loving girls Veronica Rodriguez, Megan Rain and Morgan Lee, shows she is ready to clean your car as well as your cock.

“The car wash is a classic way to lure in guys,” Anikka said. “Get out there in a bikini with a sponge and you have your pick. We had a great time shooting this and I can admit that I enjoyed the sex more than the cleaning.”

VENICE, CA – For fans of Eva Lovia things just keeping getting better and better. That’s because ever since the gorgeous starlet got out of her Digital Playground contract she’d racked up one hot scene after another, working for some of the biggest companies in all of adult entertainment.

This week she can add Blacked to the list! The award-winning company was quick to tweet this morning about their latest scene with the breathtaking beauty, entitled “Catching Up”. The scene stars Eva working with Blacked contract star and 2016 AVN Award winner Jason Brown. The scene is set to release February 9th, that is if fans can wait that long!

“Ready for this one?” Blacked’s company twitter taunted bright and early Monday morning. Eva Lovia is coming to Blacked!”

The company also included a tweet with a GIF on the scene and a link to the new trailer. Fans were quick to respond to the trailer, calling it epic and praising the director as well as the starlet. A few posted memes of celebrities clapping, a few called it an answer to their prayers and one super fan promised to tattoo it on their body to commemorate the incredible moment.

But that’s not all that’s happening this week in the busy star’s world. She’s also got brand new sets releasing on her incredible website, FallinLovia.com.

To check out the trailer for Eva’s Blacked debut in “Catching Up’ visit http://bit.ly/EvaBlacked.

Eva also has a new photo set and a new scene on her official website, http://fallinlovia.com.

Check out her Sugar and Spice Fleshlights at https://us.fleshlight.com/collections/fleshlight-girls/products/eva-lovia.

For everything Eva Lovia go to www.risingstarpr.com.

Ass Looking Great as She Adds Another Year

VENICE, CA – Jennifer White is having her birthday this week, but she is proving to be a timeless beauty.

How else could the veteran adult starlet still credibly appear in movies like Hustler’s new Tight Buns? Her ass is as tight as the day she shot her first scene and she continues to be every bit as beautiful. You can see that right on the box cover, which she shares with Shelby Paige.

“I’m pretty happy to staying in shape for another year and don’t think I don’t work hard at it!” Jennifer said. “I take my job seriously and do my best to look great and bring my best to every scene I do, including this great Hustler movie. Shooting Tight Buns was awesome and I’m thrilled fans finally get the chance to check it out.”

Help Jennifer celebrate her birthday week by checking out her Amazon wishlist at https://www.amazon.com/wishlist/1T6D2AM6SC2KF/ref=cm_sw_em_r_n_ws_fdcJnb0SJ1DXA_wb.

VENICE, CA – As much of the nation watched in horror as election night results rolled in, Layla Price was doing her part to really make America great and to provide an important alternative to the nightmare so many were watching on their televisions.

For other recent Layla scenes check out My Strange Oral Addiction 2 (Sticky Video), Love to Lick (Airerose Entertainment) and Daddy’s Inside My Ass (Zero Tolerance).

Book a private Skype show with Layla today by contacting her directly at shootlaylaprice@gmail.com.

Marijuana: For information on Gorilla Glue and Layla’s other marijuana strains go to http://www.shopmarijuana.com.

For everything Layla Price go to http://risingstarpr.com/clients/laela-pryce-bio/.